Tai Chi Chuan is performed with slow, rythmical and gracious movements. It promotes health, body-alignment, energy, awareness and can be developed to selfdefense. Tai Chi fits all people regardless of age, sex and constitution. Tai Chi Chuan enhanches the blood-circulation, strengthens the nerve- and immunesystem, thus acting as preventive medicin.

The Tai Chi Chuan practitioner will in time obtain wellbeing and energy after practise, a sensation very special connected to the Tai Chi-training. As you move, you turn your waist slowly - thus the inner organs are massaged and vitalized. As time go by, your breathing becomes deeper and longer, the body more and more relaxed and free of tension. When you keep up the training for years, you will be able to develop the martial aspect in Tai Chi Chuan.

Bjørn Darboe Nissen has studied Tai Chi Chuan since 1982 and taugth this profound method of cultivating body, mind and energy since 1989. Many major Danish companies and institutes has for a number of years used him as their Tai Chi Instructor. Please see references for further details.

He holds a Bachelor in Journalism from the Danish School of Journalism. Worked as journalist and co-editor at Nyt Aspekt, the leading Danish magazine on holistic and spiritual issues. For several years he has also produced radio and television programmes for various broadcasting corporations. 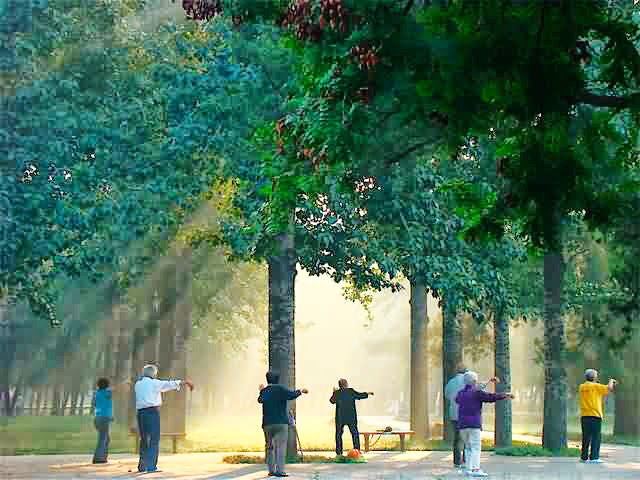 Tai Chi is preferably trained in the open, slowly and with full awareness.

Tai Chi Classes may consist of: