It's an early and sparkling summer morning and quiet amongst the trees in the park. The sunlight starts to glitter on the lake and is reflected in the green leaves on the trees. In an corner under a huge oak two persons are moving slowly and synchronous, gracious and vigorous. Even though other morning joggers passes by, the two under the oak doesn't seem to pay any attention to anything but their own movements - carried out with a relaxed concentration. They practice Tai Chi.

But what is Tai Chi all about then? To us westerners Tai Chi Chuan looks like a rather slow, exotic and graceful movement. How can these exercises stimulate any healing process for the individual? And how can these soft, round and circular movements function as a martial art at all?

Well, Tai Chi is really a synthesis of martial art, healing and meditation, and in its supreme expression, Tai Chi turns into a way of reaching enlightenment. Thus it becomes a spiritual body culture. Tai Chi is an art which cultivates and promotes both physical, emotional and mental development. As it melts together certain specified principles of body movement with esoteric knowledge about the energy structure of the human body, Tai Chi is on the mark with Yoga from India and Eurythmy from Europe.

The inner background of Tai Chi

Today, we're all acquainted with the phenomenon of Acupuncture. The healing art where thin, fine needles are introduced into the body through certain points on the skin, thus adjusting an unbalance, which may have already manifested itself as an illness. These so-called acupuncture-points are placed like pearls on a string on certain Meridians, which have been mapped in oriental Medicine. These meridians mainly run in through all fingers and toes - deep into the inner organs. The human body is connected with its Etheric body via these meridians - actually you could regard the meridians as the "lower" part of the etheric body. The science of the spirit (Theosophy, Antroposophy etc.) has always been aware of this aspect of the human being. The existence of the etheric body may also be recognised by the current nature science, for instance through a further research e.g. into phenomena like the famous Kirlian-photographs.

To have to is hard. But only in this manner the individual can show what shape it's in. Live randomly as you wish to - anyone can do that.Goethe

Tai Chi Chuan is a martial art. The movements in Tai Chi Chuan have been constructed around the knowledge about the meridians, which oriental medicine has accumulated. The movements are done following certain principles, which contain the core of Tai Chi Chuan. If you train along these guidelines, it's possible to slowly open up the flow of Chi in the meridians. This will gradually make energy flow from higher bodies into the physical body. Through this alchemical process, the physical body is refined - it's energetic level is lifted. The meridians are usually blocked to some degree in most people. Ten years on a school bench and the body, especially the back, may be inhibited.

The human body is very sensitive and a wonderfull creation - to a degree we normally do not take into consideration. Or to put it differently: we can expand our awareness into physical, emotional, mental and spiritual areas, which are normally completely unknown to our common, daily consciousness. In fact we're some completely incomprehensible, shining creatures - present in a mysterious world. The mysteries in our selves and in the world are only to be discovered on the premise of the mysteries themselves - they are so much bigger than us. All meditation, all true science, any kind of grail-quest, comprehension, aims at an amplification and expansion of our consciousness, purification of our bodies and strengthening the sensitivity of our awareness. This alternated state of mind can give us a personal experience and recognition of the spiritual nature of the universe, that created us. This consciousness will, when correctly understood, also permit a living use of the gained knowledge. 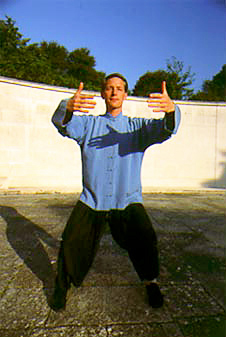 In serious Tai Chi schools the posture Embrace is kept for one whole hour every morning throughout the first year. This training changes everything.

Practicing Tai Chi Chuan endows you with a wonderful openness from where you can chose to act or not act from greater awareness. You have a broader scope in any situation - socially and personally. A state, where you are better equipped to say yes or no - because you see more clearly what the heck is going on, here and now. The more or less hidden manipulations and motives of the surroundings are unveiled, and thus your own moves become much more qualified. You gain a stillness inside, which enables you to "do the right thing" - better.

The ancient Taoists also described Tai Chi Chuan as Shadowboxing. During practise you fight your own shadow, your health unbalances, physical, emotional and mentally. At the same time your potentials unfold naturally. This art aims at turning you into A Shadowless Boxer. This takes a long time!

As the training opens up the meridians and you begin to experience more energy and a new well-being on all levels, further horizons open up. In the beginning you may not understand it - that's only natural. You have to count on a daily practise for three years (at least), before you can count on a solid and firm foundation for your retrieved baby-body - and then the real training starts. At this point, it's necessary for most of us, to have the guidance of a true Tai Chi Chuan-master. One thing he will tell you for sure: Endurance is one of the keys, that opens the door. Perhaps the most important. 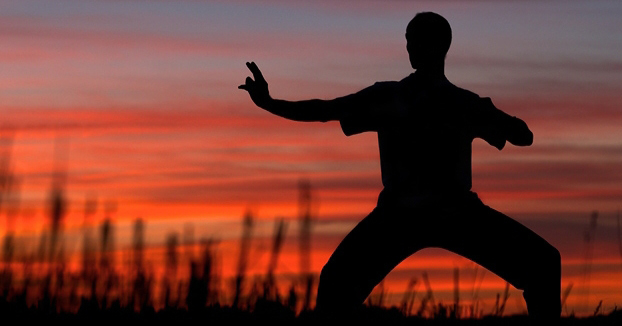 Tai Chi on an early morning

The opening of the meridians is as mentioned followed by a pouring in of energy from the higher, energetically speaking more potent bodies; the blood, the nervous-system, the glandular system and the bone-marrow are strengthened. In this way we can talk about healing the whole human body. The meridians are also bearers of consciousness of different characters - and this is really one of the thrills of doing Tai Chi Chuan. The training will develop it in you - no leaned-back sofa-philosophy is of any use here, of course. It is, though, rather easy to gain a very good strengthening result with Tai Chi Chuan in a year. Tests have shown, that the immune-systems of Tai Chi-players are considerably stronger than the average.

This art thus strengthens the etheric body, the inner organs, the Will - in fact all inner life. We can consider Tai Chi Chuan both as a healing art and as preventive medicine. You could say it's preventive in contrast to the medicine of the western world today, which actually is solely curative - and used, when illness has already occurred. That's like digging wells, when the drought is already ravaging. Isn't this a bit too late?

After practicing correctly for one year, the beginner will start to sense a warm flow of energy all the way out into the fingertips. The soft turning of the waist massages the inner organs, thus improving their state and functioning. With advanced students, the breath will sink down into the abdomen and the whole body will become relaxed. After practise you have gained new energy and are paradoxically not exhausted. This is due to the character of this method - the connection it establishes between the different human energy-bodies, combined with the relaxation of the physical body. Serious training is the mean, recumbent sofa philosophizing is futile. It is, though, relatively ease on the health level to gain a good result within a year of training.

The requirements for learning and studying Tai Chi change as one develops. What was once excellent at one stage may not be at another stage. In the end, it is each student's own effort, not the teacher or the form, that determines how good one becomes.

There are several styles in Tai Chi Chuan. Essentially they contain the same, so the difference between them is only of interest to the really dedicated practitioner. The Yang-style is the most widespread and popular, and is also said to be the one, which promotes self-healing and good health. This is mostly due to the large movements in the Yang-style. It's impossible for someone, who hasn't developed much yet, to show beginners the energy you can contact through training. Here you must be trustful or feel the joy in practicing the slow, gracious rhythmical movements of Tai Chi Chuan. Many are immediately interested simply by the sight of the lightness and agility of this art. This state is truly a fact to the skilled practitioner. But as a beginner, don't be mistaken: this soft martial art is hard - and later on, when the legs have become strong and "well-rooted", the fight moves "indoors". The personal understanding of the notion "Shadow Boxing" becomes better.

Tai Chi to the very end

After practicing correctly for a year, the beginner will start to sense a warm flow of energy into the fingertips. The soft turning of the waist massages the inner organs, thus improving their state and functioning. With advanced students, the breath will sink down into the abdomen and the whole body becomes relaxed. After practise you have gained new energy and are paradoxically not exhausted. This is due to the character of this method - the connection it establishes between the different human energy-bodies combined with relaxation of the physical body.

The access to a broader and clearer consciousness is also remarkable. You gain insight without reading thick, dusty books - and with daily practise, the body is kept young and healthy, even when you're well on in years. This is the reason, why Tai Chi always has been said to be "The Way of Rejuvenation". The energy you can open up to after a couple of years work, is very inspiring. Actually, you can keep on developing through Tai Chi Chuan, even when you become very old of age.

There is a very beautiful history about the elderly Tai Chi Chuan Master Yang-Chian (1839-1917). He obtained harmony between firmness and softness on a very high level. It is said he could fixate a bird in his open palm, so it could not fly away. When the bird tried to sink down to fly, he let his palm yield, so it could not prepare it's escape. It is said, that when Yang-Chian dreamt his death a few hours before it came, he had his family and friends come to say goodbye. He took a bath, changed to a new set of clothes, lied down on his bed - and passed on with a smile.