Tai Chi is both essentially and in the detail deeply connected with Taoist philosophy and notions. The communication between Tai Chi and Taoism is still alive, because Taoist notions and science highly conduced to the Asian culture, in which Tai Chi arose.

This is illustrated by the fact, that the outlook and ideas presented in the book Tao Te Ching and I Ching are integrated parts of Classic Tai Chi.

The cultural historic coherence between Tai Chi and Taoism is among other things illustrated by the congruity between the thoughts in the ancuent book of wisdom Tao Te Ching and the principles in Tai Chi.

Tao Te Ching was written by Lao Tzu considered to be the founder of Taoism. Amongst the numbered poems in Tao Te Ching the following can be found:

Yield and overcome;
Bend and be straight. (22)

The highest motive is to be like water:
water is essential to all life,
yet it does not demand a fee
or proclaim its importance.
Rather, it flows humbly to the lowest level,
and in so doing it is much like Tao. (8)

Nothing in the world is weaker
or more yielding than water;
yet nothing is its equal in wearing away
the hard and the strong.
There is nothing quite like it.
Thus, the weak can overpower the strong;
the flexible can overcome the rigid.
The whole world can perceive this,
but does not put it into practice. (78)

The agreement stand to reason when you compare the sentences above with the written principles of movement in Tai Chi. For instance it's emphasized, that when training Tai Chi one ought to seek a soft, supple, pliant and yielding sensation. From true softness comes true hardness it is said in the Tai Chi Classics.

In Tai Chi it's all about yielding to the opponent. The idea is to invest in loss as it is expressed. Thus you ought to learn yourself to intend a specific kind of relaxation in mind and body. This relaxcation can only be obtained by a combination of choreography & principles with an aroused awareness on inner relaxation during practising.

The ten most important principles of movement in Tai Chi can be read here.

In the sixth century Bodhidharma (Chinese: Da Mo or Ta Mo) came to the Shao-Lin monastery. Upon realizing the really poor physical condition of the Buddhist monks, caused by too much meditation and too little excersize, Da Mo introduced his Eighteen Form Lohan Exercise. This approach gave rise to the Wei Chia or outer-extrinsic forms of exercise.

Later in the fitteenth century the purported founder of Tai Chi, the monk Chang San-feng (born 1247) was honoured by the Emperor Ying-tsung with the title of chen-jen, or spiritual man who has attained the Tao and is no longer ruled by what he sees, hears or feels. This could indicate that at this time there was a close association between the philosophy of Taoism and the practice of Tai Chi.

In the Ming dynasty (14th to 17th centuries) a leading philosofer Wang Yang-ming blended Taoism and Ch'an Buddhism into a philosophy which had certain associations with movement systems such as Tai Chi.

The principles of yielding, softness, centeredness, slowness, balance, suppleness and rootedness are all elements of Taoist philosophy which Tai Chi has drawn upon in its understanding of movement, both in relation to health and to martial applications. The influences of softness and effortlessness are lucid in the names of certain movements in the Tai Chi Form, such as:

Furthermore central features of Taoist thought like contemplation and appreciation of nature seem to have been reflected in the genesis of many Tai Chi movements, such as: 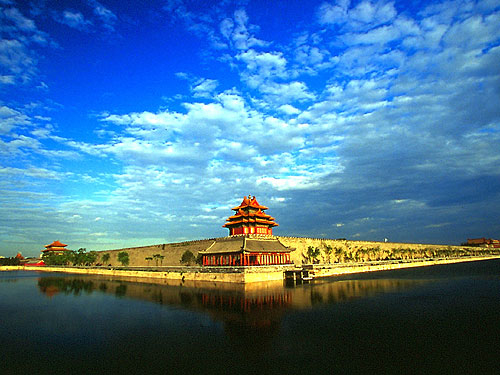 Every Tai Chi practisioner knows the story about Chang San-feng, who witnessed a fight between a bird and a snake, and thus experienced how the soft and yielding could overcome the hard and inflexible.

Particularly significant here is the reference to The White Crane (The Manchurian Crane, Grus japonensis), with its red crest an important symbol for Taoist alchemists.

Certain features of Taoist alchemy and talismanic symbolism have also found their way into the Tai Chi forms. As part of their contemplation of nature the Taoists observed the heavens and were keen students of astronomy and astrology. Their astrological knowledge and concern is reflected in a number of movements in the Tai Chi Forms, such as:

Symbolism was a potent force with an active role in Taoist thinking. Taoist magic diagrams were regarded as potent talismans having great command over spiritual forces. They invoked the harmonizing influence of yin-yang and Eternal Change, The Divine Order of Heaven, Earth and Mankind and the workings of the Universe through the principal of The Five Elements. These were symbolized by the Five Sacred Mountains (Taishan, Hengshan, Songshan, Huashan and Hengshan), central places of Taoist development and pilgrimage.

Thus it is no surprise to find that the symbolism of names has, in important ways, infiltrated the forms of Tai Chi. There was a numerological component to this symbolism as well. The number 5 has a special mystical significance to Taoists. There are the symbolic five mountains, five elements, five colours, five planets, five virtues, five emotions, five directions, etc. all of which have a mystic significance. Hence we see five Repulse Monkeys or Five Cloud Hands in the Tai Chi form. There are many instances where the numbers 1, 3, 5 and 7 figure prominently in the structure of Tai Chi.

Classic Taoist thinking is completely permeated by observations of organical principles and ideas. The ancient book of wisdom I Ching is a well known example.

I Ching consists of 64 socalled hexagrams whose texts each illustrates a certain organic principle or idea. Most hexagrams in the book describes and analyzes a specific phenomenon in nature. The phenomena are thereafter used to illuminate aspects of the human mind as well as social occurrences and structures.

As in the eleventh hexagram called T'ai (meaning Peace). It is made up by the two triagams Ch'ien, The Creative, Heaven and K'un, The Receptive, Earth, acting as polarities in a cosmic consciousness and energy field. The hexagram T'ai or Peace thus describes a situation where fulfillment is present, and surgests how to preserve this utmost propitious harmonic state of things.

Tung Chung-shu (app. 179-104 B.C.) from the Han-dynasty and Chu Hsi (1130-1200) from the Sung-dynasty further developed this thought of interaction between Man and Heaven. The basic idea was, that the universe itself is a gigantic organism (macrocosmos) wherein the human being is a lesser, but by macrocosmos mirrored organism (microcosmos).

Ancient Taoist spiritual thinking and conceptualization can be rediscovered in a modern way through Antroposophy developed in present-day Europe by Rudolf Steiner.