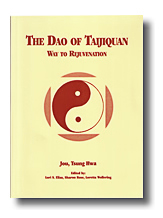 The Dao of Taijiquan

Valuable material from the Yang-family and its best students. The manuscripts in this book are by Yang Cheng-Fu, Cheng Man-ch'ing, Li Ying-arng and Yang Pan-hou. Also different stuff from the Yang-family on the essens of Tai Chi Chuan. A must to understand the depths in the Yang Style, and very useful for other styles.

15 essays by a wellknown Tai Chi-master. Instructions from chinese texts on form (with drawings), applications, push hands, principles, meditation, I Ching and art. All in Cheng Man-ching's easy understandible tone and good spirit.

A hard-to-get book on Tai Chi Chuan. The 550 pages are a thorough statement of the history of Tai Chi, it's philosofical background, the technics and the training itself. Each movement is carefully gone over. This book also explains how each Tai Chi-movement strengthens the body, especially the inner organs. In this manner Tai Chi in context with Traditional Chinese Medicin is thorougly illustrated. You kan read an extract of this under "Tai Chi as Medicine" and" in the menu to the left. A very complete book on Tai Chi Chuan. 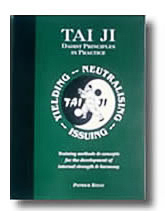 Contains training methods, teaching principles and advanced concepts of application. Taiji (Tai Chi) is explained as a balanced system for the development of efficient movement, internal strength and spiritual harmony. 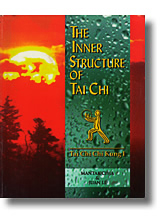 The Inner Structure of Tai Chi

One of the few books with precise anatomical drawings of the structures inside the body, and how to train these in terms of the Tai Chi-principles. De-mystifying, interesting, to be used by all styles.

Contains a lot on Qigong and meditaition, but only little on Tai Chi Chuan. It offers a practical understanding on Qi, how it works in relation to the body. Simple and powerful exercises followed by really good, instructive drawings.

The Chinese book of Wisdom I Ching gives an insight the thought-forms, which has dominated Asia for centuries. The book can be used as adviser, oracle - or just be read for its profound insight in human and social relations. The language has a beautiful visuality. Do yourself a favour and get the Richard Wilhelm-translation.